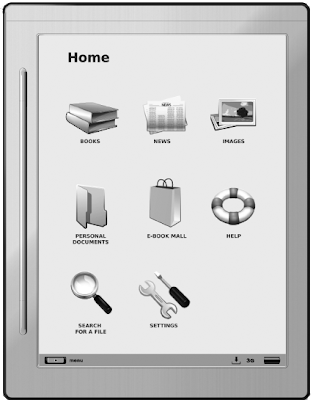 Sony one day now iRex has released details of a new and better ebook reader. The picture is a mock up release, but we know that it will have a 8.1” eink touchscreen and be released in the last quarter of this year.

The feature that grabs the attention is that has 3G wireless connectivity which means that it doesn’t need to be tethered to a PC. No carrier has been announced, nor are there details of the supporting ebook store or stores capable of the direct connection.

However, iRex is not without models and against their competitors are on the pricy side. This new model is probably not going to prove the exception. When Sony have just launched cheaper models to get mass adoption, iRex have now to either follow that lead or risk, even with wireless, being left on the shelf.

So is the ereader battles becoming clearer or just starting?

Acer , the world’s 3rd largest maker of PCs, has announced that it will expand into televisions and electronic books. It is reported to be waiting until the market develops before it releases an ebook. You may ask why and the answer is down to volume and we would expect similar Computer manufacturers to follow a similar path when the economics are right.

So as a consumer you have to make some hard decisions, in what are still hard times. Do you buy a device that today is clearly not the end product and could well be superseded within months of purchase, or wait? Do you buy into a device which may be tethered to a carrier or a specific service and book source, or do you wait for interoperability? Like any early technology, when do you buy and expect to write it off? When do you make that heavy investment and transfer your collection, or do you play safe and buy as you read?

We fear that the current ebook reader wars may be raising the consumer awareness but are also adding to their apprehension. The price of the books may be stabilising at $9.99 but the price of the devices isn’t, the service is not standard, the range is inconsistent and eink is still akin to black and white tv in today’s full colour HD world.

Finally, the eink players are banking heavily on news and magazines driving demand and that is understandable. However, where once digital may have been free News Corps words this week that this is not sustainable and has to change means that it could impact how ereaders develop and the service constraints that support them.
Posted by Martyn Daniels at Friday, August 07, 2009