Asus May Have a Few New Tricks For eBooks

The ereader market is becoming more crowded. Asus, the manufacturer of the successful Eee line of netbooks, announced on Thursday that the company will be entering the ereader market. Jerry Shen, company president for Asus, said that the company is planning to introduce an eBook Reader under its Eee Brand family by year end.It is not alone in going after this market with close competitor MSI is also planning to them. The Eee brand stands for budget-friendly products. Remember these are the team that shock the notebook and low end pc market and have driven up their market share against some big players.

We are reminded of an article we wrote in march this year which we have repeated below. Now that would be exciting if it were to happen!! 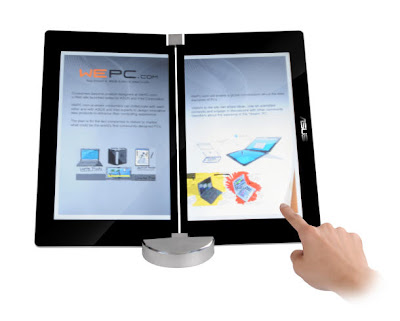 Back in 2008 Back in October 2008 ASUS and Intel launched WEPC.com. The sites slogan was you dream it, Asus Builds it, Intel Inside and it was all about getting people to share their ideas on a community designed PC. Now they want people to give them more thoughts on a Multiple Screen and Touch Interface. You can vote, comment and dream in much more detail about the Dream PC.

Last week they had a little poll from; Extend, Projection, Dual, Dual Touch, Modular Displays and tablets. So it’s no surprise the displays won the day. An extendable screen that is tiny when compact but grows when required.

This is how Asus describe the concept:
The dual panel offers a flexible working space in which users can adapt to suit their prevailing usage scenarios, for example adjusting the size of the virtual touchpad and keyboard. Through hand gestures, handwriting recognition, and multitouch, users are presented with a control surface that is both flexible and intuitive. Users can use the dual-panel concept in a myriad of usage scenarios, for example as a conventional notebook with multitouch screens, a virtual keyboard and touchpad; a multimedia hub, in which both dual panels could combine to form a larger display for widescreen entertainment; or an E-book mode in which users can hold the dual panel concept notebook just like they would a conventional book while flipping pages through intuitive gestures or by touch. These concepts aim to bring convenience to the user through technological innovations and user-centric design.
Posted by Martyn Daniels at Sunday, August 30, 2009