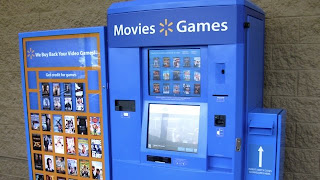 Ars Technica gave us a fascinating insight into used games with a report ‘The facts behind the game-trade kiosks’. It tells of a new kiosk being deployed ePlay in 77 Wal-Mart NorthEast US stores and 200 other locations.

The gamer wanting to sell his game can get it valued on line or take it to the kiosk and scan it in. If the trade in price is ok the disc is inserted and the kiosk identifies its condition and authenticity and the seller’s id and the empty jewel case is inserted into the trade bin beside the kiosk. If the disc is not genuine or poor condition the kiosk spits it out and says it’s unacceptable.

If the disk is unidentifiable or does not match what the user stated, there will be a screen that advises the user that the disk did not match and the disk will be returned credit will be withheld. Recovered disc are then sent to their refurbishing and distribution centre.

These kiosks also enables the user to purchase or rent games. We can’t see it in the Book business where even the kiosk dispenser has failed to catch on.