Another Day Another eBook Reader 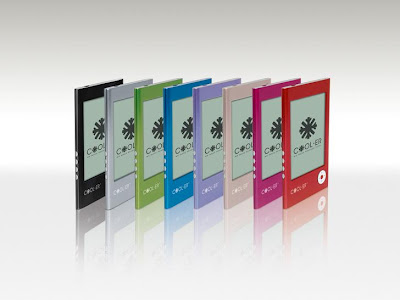 We read today in Tech radar of yet another ebook reader set to launch in the UK later this month. At first glance it looks the same as the rest only in a snazzy colour jacket. So why does its designer and self styled "entrepreneur, author, avid reader and world traveller" Neil Jones, believe it offers the "iPod moment" for e-readers?

It is apparently lighter weighing only five ounces, its batteries are claimed to last for weeks, it’s thinner at one-third of an inch thick and it comes in 8 languages and in 8 colours, but does it pass the so what test? Finally, it will be available from Coolerbooks.com along with a library offer of over a million eBooks for download from the end of the month. Its owners, Interead from Reading, claim to have the iTunes moment but somehow we believe they have just more noise. The pictures look very similar to a rebadged reader already in the market. Their claim of a million titles is certainly interesting, as it would give it the biggest library on the planet after Google and even Sony’s half a million public domain works would look small, but where would they get a million titles and are they what the consumer wants or mere fillers?

We wait but fear hype, albeit coloured hype.
Posted by Martyn Daniels at Tuesday, May 12, 2009