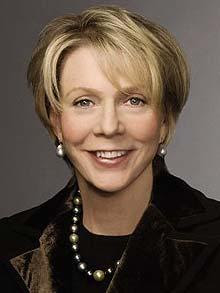 Talking about the range of titles under her control she says "You have Cosmopolitan magazine with a cute picture on the front. Then there's the internet, the mobile site, the e-reader, the books, the television programme, the radio show. Only then do you have a 360 degree brand."

Black strongly believes that the e-reader, hand-held devices will be the next big medium for magazines and have the potential to exploit the stylish layout of a consumer magazine. She is reported saying, "The company has a big investment in a product called Firstpaper," but concedes two hold ups, "Most readers don't do full colour yet and there's no way it can handle advertising at this point. But there will be advertising. That has to be that part of the model."

She doesn’t think that paid for subscriptions for magazines, “because they are not informational like a financial newspaper…We have to think of magazines and newspapers as two very separate entities – not disassociating ourselves exactly, but we do need to keep our distance."

We have already reported on the Hearst marketing initiative in fitting microchips that showed a scrolling, eye-catching advertisement for a cable television channel to the February edition of Esquire and Black is certainly keen to continue to experiment.

"Maybe now there's too much choice in the digital world," she finnishes, "How funny if we all ended up back with our print copies."
Posted by Martyn Daniels at Saturday, May 16, 2009