So what of newsprint in the digital age? 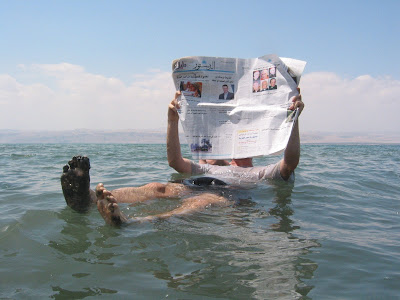 We bet you wouldn't do that with a Kindle or Plastic Logic device!

We have heard as many, if not more, predictions about the death of the newspaper over the years than any over media format. Although its history is long, the tabloid as we know it today is barely a century old. Driven my mass literacy, it rose to give the masses their daily news, gossip, insights, sport and classifieds, but today the world has changed and the newspaper world has to adjust to survive.

Television was the first salvo across its bow. It gave us our daily news which now is on a constant loop and available anywhere, anytime. Moreover it gave us pictures, realism and breaking news in real-time. The Internet has continued to expand on this and now means instant alerts, and access to any story 24 x 7. Also consolidated news from journals such as The Week provided more condensed and digestible reviews than the weighty weekenders.

Mobile technology not only gave us news on the move it changed how users interacted with the news. Suddenly everyone potentially became a journalist or photographer on the spot and who cared if the pictures were grainy – they were real time. Blogs sprung up offering news and views for free. The writing may not have been as creative or clever but like YouTube’s impact on video it was clearly visible.

The Internet opened up the lucrative classified ads , making them more readily searchable and increased their appeal to a wider audience. The free classified operators such as Craigslist in the US, as well as Kijiji and Gumtree internationally extended the appeal. Craigslist.org was one of the first online classified sites, and has grown to become the largest classified source, bringing in over 14 million unique visitors a month. This new shift has cannibalized newsprint classified revenues and now the more mainstream adverts are moving online.

Now we have the news meltdown. The Tribune Company has given a two-year notice to the Associated Press that its daily newspapers plan to drop the news service, becoming the first major newspaper chain to do. The dispute may be over new rates but the move is one that signals further changes in these tempestuous waters.

However, the real change is in the user and how, what and when they want and also how they value it.
Posted by Martyn Daniels at Friday, October 24, 2008