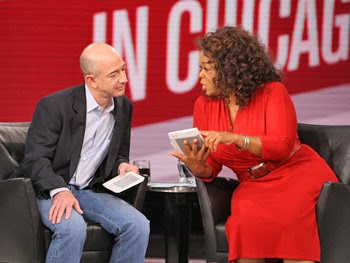 Ok who would you choose to promote your brand and product in the US? The answer is both simple and as they say a ‘no brainer’.

Oprah has done as much as anyone to promote books through endorsement and has spawned many pretenders such as Richard and Judy in the UK. She has backed Barak Obama from the start and her endorsements can turn frogs into princes. So this week she backed the Kindle and Amazon’s ebook programme.

She loves it that much she obviously ignores the air traffic rules on when to use electronic devices. ‘Right before a recent flight with Stedman, Oprah says she saw a book advertised in a newspaper she was reading and downloaded that very book as they were heading down the runway. "The other day, too, I didn't want to go out and get the paper. It was Sunday. It was raining," she says. "I go, 'I will download The New York Times,' and I just read from my bed on my Kindle." ‘

The report on www.oprah.com reads like Jeff wrote it or it was taken straight from the Kindle promotion page. Using the code OPRAHWINFREY you can now get $50 of the price of the Kindle.

Today we have several players squaring up to own the eReader device space. This battle is further complicated by the devices not all being available in every country, or in the case of the Kindle not even being supported outside North America. What impact would Oprah make? Will it make this a Kindle Christmas?

The problem Amazon has is that the device has already been declared dated with the announcements of a new model soon. This means that people will be just buying end of line models which will be superseded before they have read a few books. It’s as bad as Sony’s release of the 700 only a couple of weeks after high profile launch in the UK with Waterstones of their now dated 505.

The problem with the Amazon ebook model is that it is Amazon format, through an Amazon store, at an Amazon price point, over an Amazon connection to an Amazon device – a truly ‘exclusive’. If Amazon were to dominate the ebook market we would have a monopoly where scarcity should not occur and it is illogical to have a monopoly.

However, some would argue that this ‘exclusive world domination’ approach could be the best thing for the market. The likes of Sony would probably disappear as fast as ‘live book search’ and the others settle for the scraps. Importantly the mobile market would seriously take off and that’s one Bezos has got covered and where there are truly giants at work today. The online offer would become increasingly attractive to many. We may finally understand that downloading is not the only solution and hording loads of titles on a device just to own them is crazy in this networked age.

So the question of Oprah’s marketing pitch could prove valuable for Bezos to shift his end of line stock but for the market to work on the real digital offers and solutions.
Posted by Martyn Daniels at Saturday, October 25, 2008