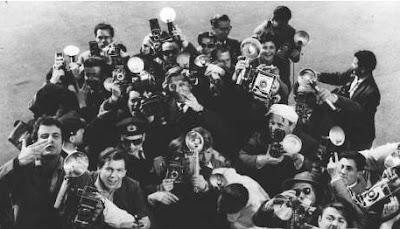 We have all seen the rise of the celebrity culture. Is it any different from those that went before or is it that private lives are now more accessible and the public appetite for up-to-the-second celebrity gossip. Publishers have clearly risen to the challenge and today we have celebrity books stacked high in bookstores and biographies on the lives of ‘stars’ who often are barely past their teenage years.
The instant gratification is no longer the Hello shoot or the Heat expose but the often out of focus and fizzy video captured on a mobile phone camera and posted on YouTube.

Everyone is fair game in the ‘public’ world where even the very famous will be harder going forward. The growing numbers of high-quality cameras in every smartphone everyone a potential paparazzo. Seesmic, a video blogging company based in San Francisco, is planning a service where anyone can record a video of a celebrity at dinner or in a conversation or just walking down the street, then send it to the Seesmic’s network for all to share. Stalking celebrities using GPS to spread news celebrity sightings is only a heartbeat away.

Kim Kardashian, is someone who now is famous for being famous and best known for a sex tape made with her boyfriend. Web sites like Popsugar.com and PerezHilton.com some of the most popular destinations. TMZ.com started a mobile offering last April and watched traffic soar to 1.1 million visitors in July. E!, the entertainment news cable channel and Web site offers celebrity news for mobile users and has 30,000 subscribers, sending them as many as three alerts a day. Yahoo Entertainment, according to Nielsen, recently had 2.9 million visitors.

A few years ago when Gary Barlow, the lead singer with Take That , released his biography we questioned why there wasn’t a CD inside with some exclusive tracks. As we now move forward the biography with a few photos looks very one dimensional. True it’s a serious attempt to capture detailed accounts but given the size of these new audiences maybe its time to start to rethink the format and explode the spine that is straight-jacketing it today.
Posted by Martyn Daniels at Friday, October 24, 2008