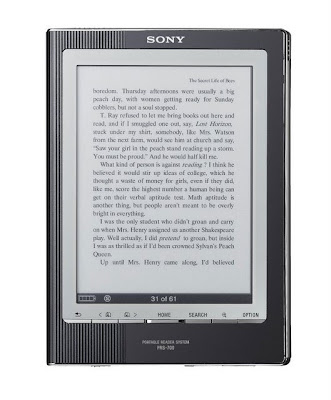 So leading up to Frankfurt we have the new Sony PRS 700 ereader making an appearance along with a new marketing US promotion. We have the new iRex we covered earlier this week. We have thanks to Boy Genius Report sight of the much talked about and expected Kindle2 and we have the usual hype and opinion from all those standing on iPhones, ereaders, laptops and everything and anything between.

So what is news and what is noise?

Sony launches a US Reader Revolution campaign to promote their eBook reader using a world record speed reader, Dave Farrow. Farrow will be reading using the Reader around the clock for 30 days in a Manhattan storefront. For each page Farrow reads, Sony will provide an eBook library of 100 classic titles to a school or learning institution. The goal is to give 15 million eBook titles by the end of the program. The questions are whether these are mere public domain titles and what they will be read on?

At the same time they announce the Sony PRS-700. This their third version or model and will be available for $400. We doubt whether it be the last model of the Reader, and can only confuse consumers who await the ‘killer device’ or are weary of purchasing transient devices. Imagine you had been one of those who committed to the Waterstones’ launch to find that in less than two months it had be overtaken by another? Would you feel a little cheated – I think so? The 10-ounce device comes with a stylus, which can be used to highlight text or make notes and can hold 350 books in its memory.

It does not have wireless and remains tethered to the Adobe DRM and digital editions route and a PC. They are already intimating a wireless version is coming. Again why buy today when they haven’t even got it right yet. 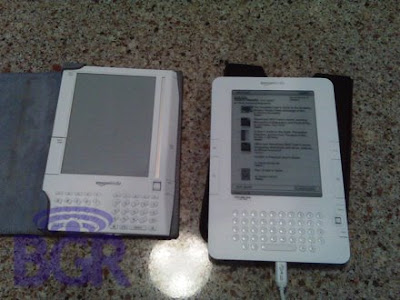 Today we have the first sight via the Boy Genius Report of the new Kindle.
Is it significantly different? Well they have changed the shape and squared it off adding smaller buttons for Home, Next Page, Menu, a joystick, which replaces the scroll wheel and Undo and Previous, Page, and Next Page controls. The keyboard has also been redesigned and apparently they have replaced their own charger with a more sensible mini USB cable. It also comes with a leather pouch.

It is still uncertain when it will make it launch but given the activity in the market it should be soon.
Posted by Martyn Daniels at Saturday, October 04, 2008