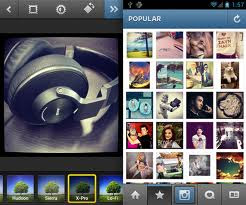 We have all become happy to share our thoughts via blogs, twitter and Facebook, our business contacts via LinkedIn, our social circles via Facebook, our videos via YouTube and our photos via Facebook and Instagram. Instagram has been downloaded and used by a staggering 27 million people, including many celebrities. In fact, the app has only just been released onto the Andriod platform and we only downloaded ourselves this weekend. So in theory the app has the potential to double its audience!

The app is like Adobe Photoshop plus much more and allows users to alter and post images on their smartphones and tablets. It offers stylistic filters, frames, and special effects to photos. Options can transform a straightforward snapshot into something very special.

Kevin Systrom, the the 26 year old CEO, who turned down an offer to join Facebook in 2004, founded Instagram only 15 months ago. With only 13 employees, Systrom now has hit the $1 billion jackpot. Systrom also retains 40% of the company and lands £400million from the deal, which values the business more than the likes of the New York Times!

Although Facebook has a reputation for buying up start-ups and then integrate the technology Systrom has reassured users that Instragram will continue to exist independently of Facebook and will continue to add new features to the product. Facebook CEO, Mark Zuckerberg commented , ‘This is an important milestone for Facebook because it's the first time we've ever acquired a product and company with so many users. We don't plan on doing many more of these, if any at all.’

As we develop our social skills it is going to be very interesting to see how ownership and privacy evolves. What is clear is that a handful of services will know a significant amount about us which can be used both positively and negatively and how much control the individual ultimately has will be very interesting to watch.
Posted by Martyn Daniels at Tuesday, April 10, 2012