Is Publishing Experiencing Its Own Arab Spring? 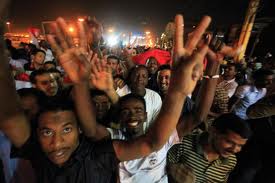 The Arab spring swept across many Arab states and was driven by the confidence that others had succeeded and maybe they weren’t alone.

It has always been true that much of publishing tends to be ultra cautious, but when it turns, it does so quickly and often on mass. Things we thought were never going to happen, suddenly start to be talked about, the evangelists spread the digital word and one player moves, watched closely by many others. If the noise is positive and the resistance small, the change can happen and we all become born again believers. It’s as if everyone is constantly waiting for someone to dip their toe in the pool of opportunity and watch if they sink or swim.

The latest cry of ‘me too’ would appear to be surfacing around DRM. Is it born out of the final acceptance that DRM is an inhibitor and not an enabler, or that it is often seen by the consumer as a pain to deal with and a straightjacket to work within, or the fact that music went DRM free and the market didn’t die, or by authors demanding it? For everyone you speak to, their will be many and often different answers and the arguments that supported its adoption are like yesterday’s regime support – forgotten.

Has anything fundamentally change to promote this new enlightenment and movement?

Yesterday, Tom Doherty Associates, sci-fi publishers of Tor, Forge, Orb, Starscape, and Tor Teen and part of the Macmillan trade empire announced that by July, their entire list of e-books will be available DRM-free. Their logic was that there authors and consumers were a technical savvy group and had demanded it for some time. DRM was cited as an inhibitor. We will not know if this was a shrewd move by Macmillan to test the market in a controlled vertical, or they just woke up one morning to a cathartic moment and realised what they stakeholders wanted.

Now every digital evangelist, industry thinker and consultant is jumping on the bandwagon and the state of DRM could be in for a bumpy ride and possible a people’s Spring, or maybe Summer, uprising.

It is interesting that once again many are talking about the removal of the strict DRM regime as an opportunity to clip Amazon’s wings. The truth could be very different and the move to DRM free MP3 helped Amazon in its music business against Apple’s iTunes, but even iTunes, when they finally changed, were not significant impacted. DRM itself has nothing to do with stimulating or suppressing market competition. It is naïve to link them as closely as some have, or perhaps they are jumping on that other Spring uprising of anti Amazon feeling.

So lets think about a DRM free world? Are we dismissing ‘soft’ or ‘social’watermark DRM too, or is it just the hard encrypted and hardware specific DRM?

It’s often hard to gauge the feeling of the crowd, but what is clear is that hard DRM is fast loosing support even quicker than some Arab regimes did in their uprisings. Will this lead to an explosion of piracy? We think piracy will increase but will not be driven by the lack of DRM so much as the issue of pricing and other variances to the physical rendition. Let’s finally face it, a serious pirate will rip it irrespective of DRM and increasingly individuals will rip it if they feel it justified. The markets with most to fear due to their high ticket price; education, academic, professional, also could have the greater opportunity to minimise the risk. These sectors are moving away from the 'tome in a straight-jacket' to an environment rich with interactive media and links. They are now, or should be, raising the added value of a media and rich platform and leaving behind the commodity featureless tome.

What remains interesting is that this potential uprising is taking place against the backdrop of the sales ‘honesty box’ and lack of rights registry. We must recognise that making fundamental changes in one aspect will have a knock on impact in others and without considering these and taking some action, the sprit of the uprising, could sour as authors find reconciling sales unacceptable and potential infringement under ever stone. Publishers will have to step up their legal diligence and actions, which mean increased cost and resource and small publishers may have to act co-operatively, or face some often scary digital reality.