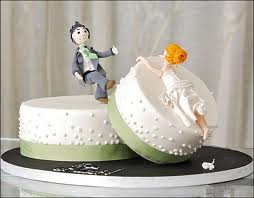 The marriage of Google Books and Indie Bookstores tied the knot between, the bride who brought her wealth of stores and customers and the groom who brought his technology and ebooks. Was it an even relationship founded on common understanding and shared belief in each other, or merely a hastily arranged mis-marriage born more of convenience than love and probably never consummated?

This week Google started divorce proceedings based on the indies not delivering sales.

Unrequited love, often drive the groom to seek pastures new and in this case Google has declared that it will start to sell e-books solely through its recently launched Google Play beginning January 31, 2013. Will it makes the envisaged sales it believes it can do better on its own or will it find the market will has moved on further and Google is not the ebook force it once envisaged?

The bride will no doubt be unindicted by new suitors hungry to convert the dowry on offer. However, will these wanabees fair any better, offer a true relationship or once again follow in the footsteps of Google when their expectations are not met. It is easy to see a line of ‘white label’ suitors who all will offer books and technology. How will any of these differ from what went before? It is often said that if one rushes on the rebound from one broken relationship to another, with the next one being to someone very similar to the first.

When we wrote the Brave New World report in 2006 we saw the opportunity for booksellers to embrace and deliver the digital opportunity. Then it was possible to see strong partnerships that could have matured, but today the landscape is very different and although the pie has grown significantly the opportunity to cut a sizable slice of it has diminished for many. We did discuss the opportunity for bookstore to build their own platform and take control of their own destiny but it was felt that marriage was more rewarding than remaining single. In hindsight we wish we would have been more forceful and argued the case stronger as a booksellers digital repository tied to stores and consumers would have had strong market appeal and perhaps would have attracted a more equal suitor or offered a stronger relationship.

The opportunity is not lost, nor should anyone dismiss the wealth on offer, but it takes strong leadership and vision now to move the indies digitally forward. The UK and US do not have the security of the Centraal Boekhuis relationship but can learn much from it. The stores themselves need to recognise that white ‘label stores’ only offer a commission not a marriage or partnership. It’s somewhat ironic that the two parties, libraries and bookstores, that are now playing the dating game, are potentially still the strongest bodies if they can the pull all the pieces together.
Posted by Martyn Daniels at Friday, April 06, 2012