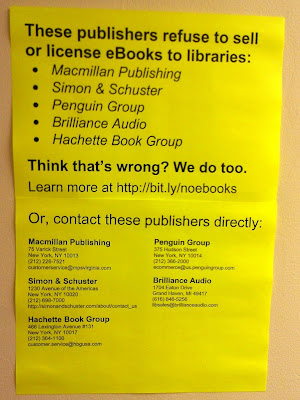 The above poster comes from Sarah Houghton, who is the Acting Director for the San Rafael Public Library, Calofornia and writes a blog Librarian in Black. In frustration to the current non supply of some major publisher's ebook titles, Houghton had posted the notice on her library wall.

Yesterday, Penguin added fuel to the debate when it announced that they have effectively shutting down their ebook relationship with the major digital public library service provider, Overdrive. We find ourselves now asking many questions about the state of digital public library support from publishers and the thorny issue of the ebook rent and loan business models.

Why are some refusing to allow public libraries to loan out their ebooks which are freely available to buy in the market? Why has Penguin withdrawn its ebooks from the Overdrive digital library service? Why has a prominent group of major publishers refused to supply ebooks to public libraries? Why did HarperCollins previously invent a rule that said ebooks wear out after the same number of loans as their physical counterparts and must be bought again? Why are some insisting that library lending has to be done physically in the library and not over the networks?

If we look at the public library we see the friction many predicted between publishers and the libraries over digital content. You can wrap it up many ways, but at the heart lies commerce and the challenges of download to buy versus loan for free. If libraries seize the opportunity to loan ebooks and appeal to a wider and larger audience they could undermine today’s revenue streams. If they don’t seize the digital opportunity and remain wedded in the physical world they could spiral into obsolescence.

Some would suggest that libraries charge for ebook rentals and also sell downloads, but does this work against their public principles. Some would ask why publishers aren’t renting books out direct themselves and why we are still wedded to the ‘ownership’ model in a virtual world? If there were to be a significant shift in market demand, do publishers have rental models that would hold water?

Some like Bloomsbury Online are quietly forging library relationships and moving forward, whilst others appear to be standing firm behind the barricades and not moving.

The Overdrive service is not new and it is the dominant provider to public libraries today, not just in the US, but increasingly in many countries. The libraries like the retailers have left it to third parties to invest and provide the common platform and repository. Was this wise, – probably not? Was it inevitable given the funding, – probably? However, we are were we are and it isn’t going to change for some time.

The tragedy is that these battles are being fought in public at a time when we all try to help reposition the public library in the face of disruptive change, spending cuts and even closures. It would appear to be more about reacting to change, not from a collective, but a singular perspective.

Some of our other recent posts on this subject:
Can eBooks meet the Changing Social Demand? Nov 28th 2011
Whose going to capture the various library worlds? June 20th 2011
Amazon Takes Another Step to Join the Publishing Pieces May 5th 2011
Amazon Overdrive Potentially Lock Up Libraries April 20th 2011
Freeing eLibraries to Compete? March 15th 2011
Digital Library Madness: 26 and You Are Out February 27th 2011
'Public Libraries: Back to the Future'. Brave New World December 2010
Posted by Martyn Daniels at Friday, February 10, 2012

The latest idea some half brain has had is that the memebrs must go to the library and book out the ebook transferring it from the derver via a dongle to the memebrs device. This is insulting to those who have difficulty through disabilty and by the stupidity of the process in today's networked world can only reflect badly on those promoting it.

We operated a danish library sytem for ebooks which worked fine on the principle that once authenticated network access was fine. Bloomsbury online library shelf works on virtual access after authentication and the vast majority of academic libraries also are remotely accessible.

Perhaps there is more behind the move than the obvious schoolyard tactics of 'its my ball and iam not playing!'