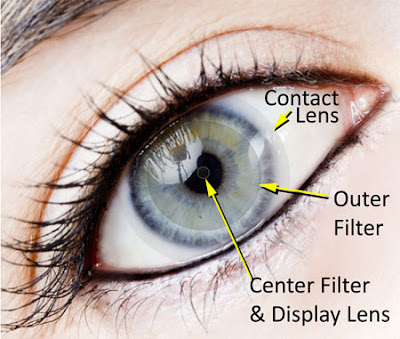 We probably all remember sci fi films with X-Ray Specs and bionic men and thought these were about a future we would never actually see off the big screen but things are changing at speed. We have seen the intuitive vision of Pranav Mistry start to appear and can start to see the end of our interface with technology as we know it today.

Our good friend and Fururoligist Ray Hammond wrote this month about two subjects which caught our eye.

First was about optical Research and Development (R&D) being undertaken by US military body DARPA. Their mission is to maintain the technological superiority of the U.S.and over the years, DARPA has funded R&D that not only has improved US military capabilities but has impacted the wiser community. They are currently working with Innovega researchers in the development of iOptiks. Traditional video eyewear blocks the wearer’s view of their surroundings. A loss of peripheral vision with non-transparent eyewear for mobile applications is impractical and unsafe.

iOptiks contact lenses enhance normal vision, allowing a wearer to view virtual and augmented reality images without the need for bulky headgear such as virtual reality helmets. Digital images are projected onto tiny full-colour displays that are very near the eye. This could give soldiers better situational awareness in intelligence, surveillance, and reconnaissance (ISR) activities.

The second piece of news came from the New York Times and was with respect to claims that Google is to launch data glasses by the end of the year. The data glasses are expected to cost around the price of current smartphones, or $250 to $600, be based on Andriod and include a small screen that will sit a few inches from the wearer’s eyes. They will also have a 3G or 4G data connection and a number of sensors including motion and GPS.

Eyewear is described as a “natural technology interface” and one which is consistent with today’s mobile lifestyle. Sounds far fetched and distracting but it is coming soon once it finds its initial application it will no doubt impact how we look at things and interact with technology moving forward. The thought alone starts to make our current displays look like those early mobile ‘brick’ phones!
Posted by Martyn Daniels at Wednesday, February 29, 2012

Check out this promo video on how googles specs may work. I love that they have used Fred Bass's Strand bookstore http://youtu.be/9c6W4CCU9M4