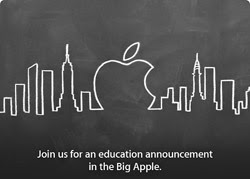 Before his death Steve Jobs had already targeted textbooks as the next opportunity His idea was to hire the best textbook writers to new create digital versions that were complimentary and exploited the iPad. Importantly he wanted to make them free so they would obviate the US state adoption and certification process, which he thought was “corrupt.” In chapter 38 of his biography he says “ if we can make the textbooks free, and they come with the iPad, then they don’t have to be certified. The crappy economy at the state level will last for a decade, and we can give them an opportunity to circumvent that whole process and save money.”

Apple have now announced a special event at the Guggenheim Museum in New York City on Jan. 19. It is widely reported that Apple will announce partnerships with textbook publishers aimed at positioning Apple at the heart of the multi billion dollar market. Apple will launch their new digital textbook business. We don’t know the plan, but expect that in a market dominated by a few large publishers such as Pearson Education, Cengage Learning, McGraw-Hill Education, John Wiley & Sons and Macmillan that some will be looking for that Apple magic to rub off on just on their sales but their share values.

A report, "Simba Information's 2011 National Textbook Adoption Scorecard and 2012 Outlook," claims that almost all adoption states now are either promoting or permitting the inclusion of digital textbooks and other digital resources and importantly this includes hardware. It states that "Texas jettisoned the term textbook and replaced it with instructional materials, expanding the adoption process…Recent changes have also allowed districts to acquire hardware using the adoption funds." With respect to Florida it reports that the state’s Board of Education has overhauled its instructional materials adoption process and placed a greater emphasis on the approval and spending for digital materials, By the 2015-2016 school year…districts are required to spend at least 50% of their funding on digital materials."

If Apple were to secure a significant foothold in the market and deliver a seed change in how textbooks get adopted and bought they could well see significant revenues both in devices and in collecting 30% commission on each textbook sale.

So apart from the industry stalwarts such as Follett who are some of the leading digital textbook players today and can they adapt top any disruptive change?

CourseSmart.
The company was founded by a consortium of higher education textbook publishers to both offer digital inspection copies and full titles. It currently has iOS app for reading textbooks and with the backing of the major publishers is a force in the market. It is questionable whether this is used as the content repository and vehicle and so bolster its position further, or is sacrificed by its publishers and will now find itself competing with Apple.

Kno.
Kno has moved from being a device company to a platform and software one and is reported to have some 150,000 textbooks from 45 publishers. Kno textbooks are already viewable on Apple devices and the company was the top-downloaded educational app in Apple’s App Store at the end of last year .

Inkling.
Inkling has an iPad textbook app), which combines reading school texts with social and interactive ways to study with others with links to external and authoritative sources. McGraw-Hill and Pearson have both invested in Inkling.

Vitalsource.
Is part of Ingram Content Group also has its own app, with 60,000 digital textbook titles available for download to any iOS device. Vitalsource now has two million students using its platform worldwide and providing feedback to tell a publisher, “Nobody is reading Chapter 8,” as well as enabling enhanced multimedia applications.

Then there is the wonderfully branded site http://www.appletextbooks.com/ . A few challenges here we think.

The iBookstore hasn’t lived up to the expectations that many had and the Apple agency model is subject to a number of fair trading reviews. Will textbooks fair differently and make the difference and how will impact others already trading digital content?
We then have the Appleworld rule against running apps on iOS devices that direct the user away from Apple's ecosystem to buy competing products without using Apple e-commerce engines to handle the transaction. Apple has imposed a 30% tool both and made it harder to buy from the likes of Amazon, Barnes and Noble and others. However as demonstrated by Amazon’s latest ipad optimized website its relatively easy to provide a clean and touch-friendly for iPad-based browsing experience for readers without a 30% toll booth. With increasingly powerful Web-based solutions using technologies like HTML5, Apple won't be able to keep its ecosystem as closed as it might like.

Amazon’s touch-optimized Kindle Store for iPad allows readers to purchase or read Kindle e-book selections via Safari. The HTML5-based reading app is available via amazon.com/cloudreader and provides access to e-books through the browser, offline and online, with no downloading or installation required. Cloud Reader automatically syncs with other Kindle apps.

The AAP (American Association of Publishers) estimates that the college textbooks industry was worth $4.58 billion last year. Student Monitor, a private New Jersey student market research company claims that autumn etextbook acquisitions where up over 100% on spring and accounted for some 5% of sales. Simba Information, estimates that etextbooks will rise by 44.3% and generate $267.3 million US sales this year and they also estimate that, sales generated from state textbook adoption programs in Texas totaled $660 million in 2011.

However, we have to be also mindful of Job’s intent was not just to shake up the ‘corrupt’ textbook supply chain but to make them affordable if not free! Whatever the outcome Apple appears determined to shake the tree and collect the fruit.
Posted by Martyn Daniels at Friday, January 13, 2012

iPad with iTextbooks, that's a sure hit! I hope the announcement will be truly more on Steve Jobs' visions... Let's wait and see.

Interesting and important information. It is really beneficial for us. Thanks