Can You Define Tomorrow's Digital Library? 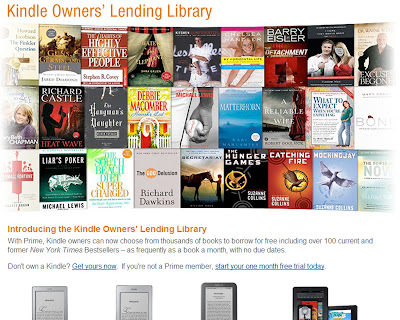 Today we have two separate but interlinked news articles on libraries. Declining spend, visits, issues, stock, staff numbers would all send out alarm bells to most businesses let alone libraries today and the news that the biggest industry player has now launched its own ebook lending library would certainly heighten the alarm bells.

It’s just under a year since we wrote an article ‘Public Libraries: Back to the Future’. The article was about the history of the public library and changes that it now faces in the 21st century. This article was different to the many others we have written, in that it focused on the changes that libraries have gone through both in their funding and their membership and its concluding comments questioned why tomorrow should be the same as today and remain unanswered :

Many would go on blindly demanding on the universal right to 'free' and that the funding by public funds must be a given. However, some would now suggest that this needs to be seriously questioned if we are to avoid the questionable digital position adopted by the UK PA over electronic access, the handing over of public assets to Google and the potential challenges of digital subscription/circulation libraries outside of the public control. Could Amazon or Google Editions become the new digital subscription / circulation library?

The CIPFA report also stated that the total number of volunteers in UK libraries had risen by 22.3% to 21,462 people whilst the number of library staff had dropped by 4.3% to 23,681 over the same period.

As we face the digital challenge with declining spend, visits, issues, stock, staff numbers we have to ask whether public libraries as we know them today are sustainable.

Secondly, we have the launch of Amazon’s Kindle Owners' Lending Library, which allows ebooks to be borrowed by US Prime members and read on all Kindle E Ink and Fire devices. Prime began as a membership offer for package-shipping benefits and costs $79 per annum and has now added video-streaming with some 13,000 movies and TV shows to members as well as ebook lending. Prime members will only be able to borrow one book out at a time for up to a month and any Notes, highlights and bookmarks made will be saved even when they return the book. When they want to borrow a new book the old book is effectively removed.

In September Amazon entered in agreement with Overdrive to make Kindle titles available to libraries and already libraries claim that the impact of this has been significant in the US.

Amazon claims that Kindle Owners' Lending Library will offer "thousands of books to borrow", but today these will exclude titles from the major trade houses, who have refused to join. Amazon appears to have reached a fixed fee agreement with other publishers and is claimed in some cases to be purchasing a title each time it is borrowed by a reader. Some would suggest that to grow the service in the short term Amazon doesn’t need the major Trade Houses and if like everything else they have pioneered they get it right the major Trade House will need them or an alternative in the long term.