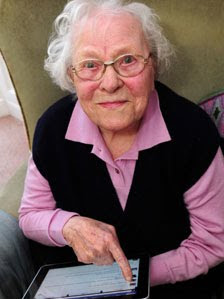 In the past we have written about Ivy Bean who died at 104 earlier this year. She wass a very active user of twitter with tens of thousands of friends who shared her every thought. Now we read about another centenarian, who it is claimed, is the oldest Faceboook user.

Lillian Lowe, uses Facebook to communicate with a few dozen friends but since she was dubbed Facebook’s oldest user she has been inundated with friendship requests from around the world. Lillian, a retired hotelier and businesswoman from Tenby, is only 103 and uses the service twice a week to keep up to date with family. She said she has heard of Twitter but does not know what it is.

The social world of twitter and Facebook may be seen by many as belonging to the young generation but it is clear that they offer new opportunities for the older generation to communicate with people they can’t get to see. It is certainly something that social groups should note and is a clear way of helping people to keep their brains active, friendships alive and create new communities.

Thanks for sharing your post and it was superb .I would like to hear more from you in future too.