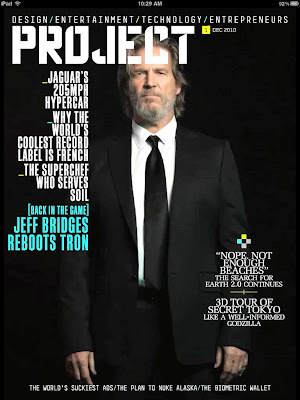 Sir Richard Branson, is the UK media magnate, industrialist, airline operator has built a wide range of businesses on his Virgin brand. Virgin has become one of the widest brand used today, endorsing financial products, telecoms services, railways, airlines, holidays and has even branded some racy book publishing and all with that splash of red and iconic logo. Branson has never been afraid to take on giants and now is breaking into magazine publishing, not in pint, but with an iPad only title called ‘Project.’

Virgin aim to be as ever different, they have already created a contest to design the front cover of their upcoming crowd-sourced issue of Project which is due out "early next year." One of the launch issue’s articles gets readers to use their finger to wipe away ‘dirt’ on the screen to reveal the headline "Eat My Dirt," and a feature about a Danish chef. It’s not just the articles that are interactive with adverts too leading the reader into new depths of engagement.

Project launched a month ago with great fanfare and a cost of $2.99 for issue one. Now, courtesy of Virgin America, Virgin Blue and Virgin Mobile Canada, the first issue of Project will be now be free to download between 23rd & 29th December. Branson and his Virgin Digital Publishing venture is primed to not just enter the market , but take on that old fox Murdoch and his iPad only publication ‘The Daily’ which is due out early in the new year.

But launching a new magazine has risk and the obvious question is whether the limited free offer is an ‘extra’ gimmick or a ‘needs must’? When Project first launched Apple did not have the ability to support recurring application subscriptions and this important functionality is now expected to be introduced alongside the launch of ‘The Daily’ in January. However the questions remain, can Virgin break into the magazine market, can they do it behind a pay wall and can they do it on an iPad only platform?