Newsnight: The Future of the Public Library 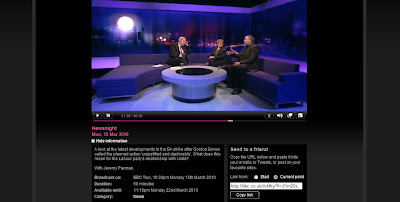 The topical news programme covered the role of public libraries and featured Margret Hodge the minister responsible for the current review and Alan Gibbons, author and library campaigner.

What is clear is that by normalising the library stats they start to become meaningless. It fails to identify those libraries who are thriving and why and those who are failing and need attention. It merely says that they all are failing.

Hodge came out with some classic noise stating that there are more libraries than Starbucks and Boots and more people visit libraries than shop in the West End – what a Hodge Potch. She clearly is keen on ebooks pointing out that only 12 out of 151 authorities are considering them and again mentioning them as the future. She also accepts that money is going to get squeezed so she wants to look at new funding opportunities but she clearly stated that there will be no change in the law governing libraries.

A cynic would suggest that she clearly sees the opportunity of cutting costs and privatising the service. That may be reality but it’s the lack of clarity on PLR, the free to lend model and the potential UK virtual library which are not being discussed.

Clearly ebooks don’t need to be bought more than once as they don’t wear out, they don’t take up shelf space, they can be provided and funded through a public private partnership and they can be serviced independent of all that prime real estate.

Perhaps we have to wait till next week to find out whether it will be a Hodge Potch or whether see will address the management and role of libraries in the 21st century.

Click here to see the BBC iPayer clip of the programme
Posted by Martyn Daniels at Tuesday, March 16, 2010