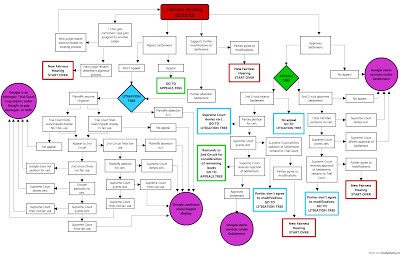 Library Copyright Alliance has released this diagram which shows the maze of options available for Google Books Settlement. The schematic was developed by Jonathan Band and shows that the outcome is complex and that litigation and appeals are clearly expected. Click on the link to see the diagram issued by the American Library Association (ALA), the Association of Research Libraries (ARL), and the Association of College and Research Libraries (ACRL) they have called “GBS March Madness: Paths Forward for the Google Books Settlement.

What we can't predict is Judge Chin's verdict but what we can predict is that this will be but another step along this divisive and ill conceived settlement that has slit the publishing industry, raised over 6,500 author and publisher objections and was entered into by one side to supposedly stop piracy and on the other to capture all books printed for what can best be described as chump change.
Posted by Martyn Daniels at Thursday, March 04, 2010