C4 Book Club: Oi'll Give It One 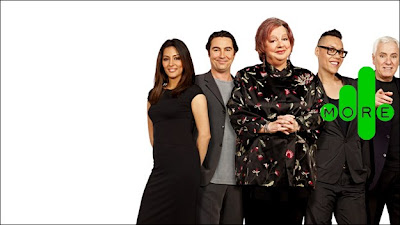 'The TV Book Club' was broadcast last night on UK Channel 4 and if you missed it you cand see it by clicking here.

We found ourselves drawn into the usual sofa debate format, which may work for some, but clearly lacks the visual and TV factor. In fact if it wasn’t for Chris Evans ability to communicate, the show would have sadly been a total no event. When will the trade realise that it doesn’t have to crowd as many ‘celebrities onto couches to sell books? In fact there were so many that we hope they weren’t being paid by the word. The big question is whether the purpose of a TV show such as this is to sell specific titles in what some will see as a form of payola, or to promote reading and interest in books, authors and the world they unlock.

So what is the right format for TV book promotion? Jools Holland lets the music play for itself and mixes tastes in such a way that there is usually something for everyone and something new as well. Jonathan Ross stamps his personality, knowledge and views on the films as did Barry Norman before him. This couch potato of a Book Club merely filled a slot and lacked passion and conviction. It felt like asking a group of sixth form English students to discuss their course reads.

In the sixties UK TV had ‘Juke Box Jury’ with David Jacobs introducing singles to celebrities who after the short exposure would vote the records either a hit or a miss. The other UK channel had ‘Thank your Lucky Stars’ Pete Murray and Janice Nicholls, a show where the singles were given marks out of five and Janice found fame by her catchphrase ‘Oi'll Give It Foive' . We then had a change and shows such as Ready Steady Go , then The Old Grey Whistle Test and now Jools, all of which engaged viewers into new music and not the charts and in doing so they have changed how music is presented.

We sadly appear to still be stuck in those cringe-worthy chart obsessed day of earlier music TV, searching for the right book format and how to engage new readers.
Posted by Martyn Daniels at Monday, January 18, 2010