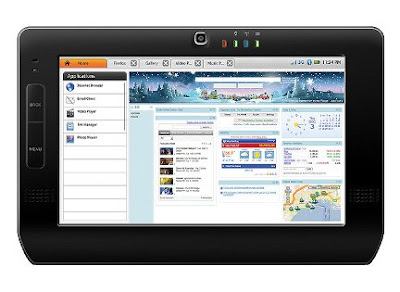 So the Consumer Electronics Show (CES) in Las Vegas is about to open its doors with two of the biggest players lurking outside, Google poised to announce its Nexus and everyone waiting to hear Apple announce its iSlate. Can we expect surprises at CES or will the real show be outside Vegas?

A tablet a day may be the remedy sought by some and we have already seen the impressive OLPC OX3 announcement and now Freescale Semiconductor has announced a new netbook, notebook, tablet or slate type design for manufacturers wanting to build a Linux tablet running ARM's low-power chip architecture.

Freescale prefers to call the new design a 'smartbook' , but whatever the name they reckon the 7” screened device could be delivered this summer for under $200 running on the Android platform.

Over to CES for the next in the tablet beauty contest.
Posted by Martyn Daniels at Monday, January 04, 2010