U2 Open Up New Revenues Online 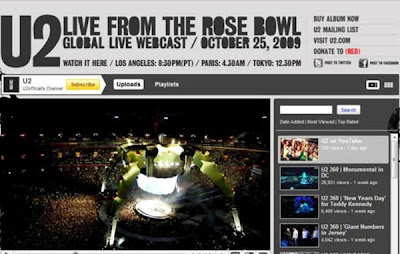 Last month those progressive technology supporters and rockers U2 recorded a live performance at the Rose Bowl, Pasadena, California for simultaneous viewing on the YouTube website. The video which was one of the first of its kind attracted a staggering 10 million hits. It was such a shock to all that Google hadn’t even sold sponsorship deals for the event and YouTube had refused to pay U2. We think U2 would demand payment in the future and pay per view for those special concerts could be an additional revenue earner especially if they are sponsored too. 10 million is a significant number and one that TV producers would be very happy to achieve especially for a music concert!

YouTube is now apparently considering a change in strategy that may see it offer a different service on a pay to view basis. Big band certainly have another opportunity to raise money and as George Martin once said way back in the sixties in his days with the Beatles, ‘the album is the menu, the concert is the meal.’
Posted by Martyn Daniels at Sunday, November 08, 2009

Wow @ 10 Million views. I hope they charge a reasonable pay per view fee...Main stream pay per view events would strive over youtube, but then they have streaming and bandwidth issues to worry about, a payment system as well, and copyright and pirating issues.

In some cases, I'd say keep doing what they do best, but this a huge source of untapped revenue for Youtube and Google, they should go for it asap.