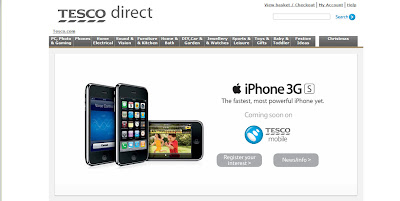 It seems the UK is now open season for all who want an iPhone. Only yesterday we were offered one from a service provider who isn’t supposed to have a contract and today supermarket giant Tesco announced that it hoped to offer the phone "in time for Christmas".

The Tesco deal will be tied to Tesco Mobile who already has 2 million mobile customers and is a joint venture with O2. Tesco has not revealed tariffs, but you can guarantee they will be "competitive".

Vodafone and Orange have signed deals to sell the phone but others clearly will sell and support contracts for iPhones. The question is what this does to the balance of the market and also others who are trying to gain ground? Tesco will certainly empty pockets and brings the iPhone right alongside the weekly shop. The one big casualty will be the devices that are tied to operating systems who haven’t got an app store and whose system doesn’t appeal top the developers. So who would you back: Blackberry, Symbian, Android, Palm, Windows?

We have an iPhone but our second contract is up for grabs as we speak – watch this space.
Posted by Martyn Daniels at Wednesday, November 25, 2009