We have long written that the current mobile wars have at their heart two major keys; applications and technology. The applications wars is raging but today has a clear winner in Apple’s iPhone. The question is whether leisure application can flip into business ones and it hard to see any reason this should not happen. So we are down to how many times developers wish to write and maintain their apps, one maybe two but not many times. The result is Apple and potentially Android and the rest face hard times.

The second key is technology and although Apple has the advantage they are not as open as others and still have a tendency to live in Appleworld. Their stubbornness towards Flash is a great example of them wanting the games played to their rules. Technology will always come from where you least expect it and also Apple should have learnt that standing up to the market can backfire. Remember the days when PCs first appeared and again we had similar battles? Interestingly the one offer that has taken the neutral ground and potentially offers the best challenge by not being tied to hardware is Android. Couple this clever approach with the backing of Google and its open software and there is a real contender.

Ars Technica covers several aspects of this battle and is supported by the latest Mobile Metrics report for mobile ad firm AdMob. We will not steal its thunder but have borrowed the two diagrams from the article which speak volumes themselves. 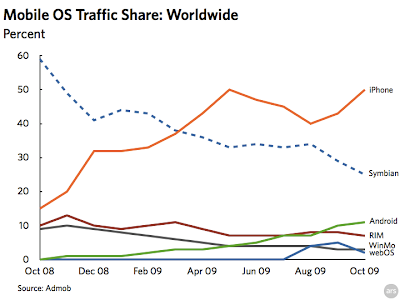 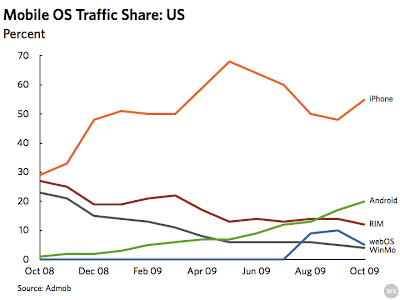