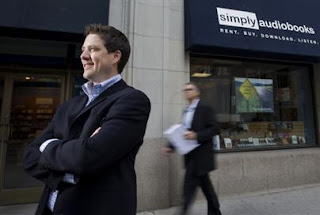 Audio books have the ability to be the first tipping point in book publishing. After all, you only need to plug in the earphones and the experience is the same as with cassettes and CDs. Today digital downloads obviate the numerous tapes and CDs and their packaging and render the files to funky MP3 players, mobiles and the iconic ‘I’ family. The market is growing but why isn’t it exploding?

The Finacial Post gives us an insight into the Canadian firm Simply Audiobooks, headed by Sean Neville. The sign over the door says ‘rent, buy, download, listen’ but Mr Neville is not alone as he finds himself up against Amazon.com.

Simply Audiobooks model is based on rental with customers paying a monthly membership fee to receive a number of CD audiobooks in the mail, which they listen to and then return. This rental stream accounts for 5 of 7 dollars of sales today. So how does Simply Audiobooks increase its download revenues and defend itself against the Amazon / Audible threat and their exclusive deal with iTunes which still ahs two hours to run.
Audible‘s strength has been its proprietary DRM, but if the market were to flip like music towards MP3 and DRM free downloads, it could be Audible’s weakness. All the major publishers including Random House, Penguin Group and Simon & Schuster have stated the intent to go MP3 and have begun making audiobook files available DRM-free but this has proved a slow movement.

DRM is restricting the market, but the issues are complex and often involve rights not being cleared to sell DRM free. So we have what may be best described as a ‘Mexican stand off’. There is demand but the market is being constrained on one hand by a lack of cleared rights and the other by a monopoly. Some would say that the monopoly is good and brings economies of scale, but others that it constrains consumer choice and controls margin for all. If publishers can’t provide DRM files they must accept a growing monopoly.

We wish Simple Audiobooks well and hope that publishers are able to speed their DRM free offers .
Posted by Martyn Daniels at Tuesday, September 02, 2008

Great post - I linked to it on my blog. More people are listening to audiobooks on more more devices, so more freedom can only mean more money.

Martyn - great commentary. Its so important that audio books keep up with developing technology and delivery channels.

P.S. You might want to check out Simply Audiobooks's blog for updates. http://blog.simplyaudiobooks.com/