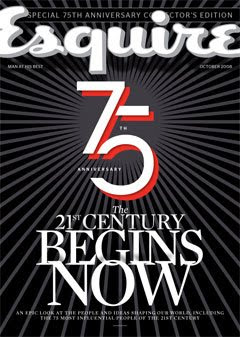 It is a well established fact that our vices tend to drive technology. Some may put it another way and say that gambling and pornography are at the forefront of technology and its early adoption and exploitation. It was therefore interesting to stumble across the ‘top shelf’ Esquire magazine’s October 75th Anniversary issue, to discover that they had published an experimental limited-edition, featuring an electronic ink front cover.

On the cover is a flexible dynamic display used for showing an attention grabbing cover as well as an animated advertisement on the inside. So we now have flexible eink being used alongside, or inside traditional print.

Because the covers were assembled in Mexico they had to be transported by refrigerated trucks to help preserve battery life, which erodes in extreme heat. Once in Mexico, a hundred-thousand-plus covers arewere assembled by hand, with a thin layer of protective foam being used to protect the electronics.The completed covers were then shipped to the company’s printers in Kentucky and using a rig specially created for this issue, machines bounded the hand-assembled covers to the rest of the magazine. The issue was then shipped to newsstands across the U.S.

There are instructions on how to; recycle the edition, what to do if your cover isn’t flashing, (the connotations of which for Esquire buyers is unprintable!), and instructions on who to email if you can find ways to hack the screen, or do other geeky stuff. The technology itself is relatively cheap being reported at $2.00 for the animated cover.

Does this mean that we’ll have another form of digital magazine in the market and one that is 'half and half'? Will this model wrestle those advertising dollars back from online or speed them towards it?

Who pays? Today, we have to shell out loads of cash to get an ebook reader which we all know has a limited life expectancy and where content storage and its retrieval may prove problematic in the future. We have long said that the online model makes most sense in today’s always online world and perhaps this half and half retains that novelty that can keep magazines alive, at no addition cost to the reader and live alongside online?

Does this mean we now all have to watch those top shelves to see what’s happening digitally?
Posted by Martyn Daniels at Friday, September 12, 2008