Another Day and Another Big eReader 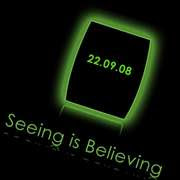 Septemberfest is well on us now and another digital reader announcement is in the making. Not to be undone by Plastic Logic’s reader we now see that iRex is currently running a teaser on its site for a new product to launch on 22 September. The event is called "seeing is believing". It not unlike the campaign, which we reported on early this week that is currently being run by Sony.

Forbes, report that the company is to launch an "evolved" e-book reader dubbed the iRex Reader 1000 with a 10.2 inch diagonal E-Ink display with a touchscreen plus stylus version available as an upgrade screen and aimed clearly at the business user. The reader will have 80 hours battery life, support a wide range of document formats and some models will also have Wi-Fi, Bluetooth and 3G connectivity.

This raises the bar further against new entrants such as Plastic Logic and the rumoured bigger Kindle. The question is whether the business sector approach has more legs than the ebook consumer one? With pricing for a basic non-touch model rumoured to be $650 the business approach seems sensible. The Blackberry, like the laptop before it, has shown that the business market can drive volume and stimulate the consumer market. In addition as business becomes more communications dependant being able to read documents and other material on a reasonable sized tablet could have appeal. In many cases it’s down to whether the IT heads want to push it or restrict users to laptops and notebooks. Remember eink still doesn’t support video or even colour.

The IT guys are the business world gatekeepers and a friend told me last week that he could have a Blackberry, or a 3G dongle, but not both. It appears that life in IT is Binary all the way through!
Posted by Martyn Daniels at Friday, September 19, 2008