Remember those car maps we all had difficulty storing as they were either on the large size or fat with pages. We had one for our town or city and one of the country and we had to regularly buy the latest annual edition as the old one was worn out or feared out of date.

Can you remember only a few years ago when the hottest Christmas present was a SatNav and TomTom’s became the ubiquitous toy to finding how to get from A to B. Who need the ‘knowledge’ (London taxi driver’s test of street maps) when you had a StaNav fixed to your windscreen telling you were to go and even correcting your errors. Then the car manufacturers fitted them and an optional extra. 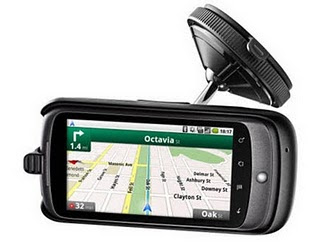 Google is now stocking car docks for its Nexus One, effectively making the satnav redundant. In addition to holding your Nexus One, the car dock also charges your phone’s battery, has built in speakers and volume controls, lets you use your phone handsfree, provides voice and navigation apps and costs $55.

We now have the Google maps explosion, satellite pictures to zoom in on your neighbour back garden, street maps which take us down onto the tarmac and the global maps to arm every tourist before he leaves.

So in a relatively short period we have moved from a dearth of information to a potential overload. From single dimensional viewed maps to multi dimensional mobile maps on demand and to fully integrated digital maps in multi functional devices. If everywhere on land and sea is mapped, interactively accessible and feature rich, what comes next? If maps that once had commercial value are now free to all, who will invest in tomorrow’s mapping? If we can tag an individual, a vehicle, literally any thing to GPS, are we effectively creating a surveillance state? What are the privacy limits we would wish to see? If any one organisation or government knows where we are at any point day and night how privacy can be protected?
Posted by Martyn Daniels at Sunday, April 11, 2010