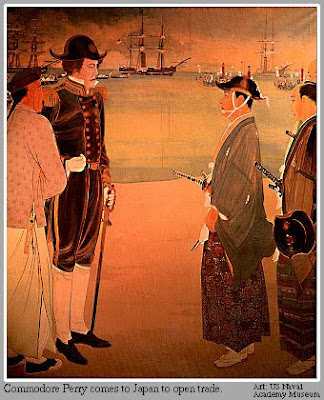 On July 8th 1853 four black hulled US Navy ships sailed into Edo Bay in Japan under the command of Commodore Mathew Perry. The ‘Black Ships’ demanded the opening up of trade. When asked to leave Perry refused and demanded permission to present a letter from President Millard Fillmore, threatening force if he was denied. Perry even demonstrated US naval power by attacking several building with cannon fire. The Japanese government was forced to let Perry come ashore to avoid further naval bombardment by his superior and modern weaponary.

The term "Black Ships", in Japan, came to symbolise a threat imposed by Western technology.

Japanese communications minister, Kazuhiro Haraguchi and the Electronic Book Publishers Association of Japan have now compared Apple’s iPad to the “Black Ships” that opened up Japan some 157 years ago.

Today ebook sales in Japan are significantly higher than even the US but are mainly manga comics and keitia novels on mobile phones. The mobile phone rules in Japan and even Sony and Panasonic have abandoned their ereader business in 2007 and 2008 respectfully. Amazon’s Kindle has not entered the market and no Japanese-language titles are available from its US site.

Publishers everywhere are wary on the implications of not the iPad itself but its pricing and how that may affect negotiations with authors and distributors. The Japanese publishing market is very ‘closed’ with publishers already setting retail prices and preventing discounting and with printing, publishing and distribution being strongly interconnected. So why fear these new ‘Black Ships’?

The issue is that Japan is once again very nervous of the sight of US traders that can’t be repelled and will change their way of doing business. The Stability and depth of the market is down to its economic balance and the Japanese publishers clearly feel that the Apple effect could imbalance the trade by forcing US pricing models on them. However Japan is suffering a steady decline in books and magazines revenues so will these new ‘Black Ships’ open up the market? We also have to respect that Japanese consumers, are truly mobile centric and that a tablet may be too big for them to swallow on the move.