Can I Return This eReader If I Get One For Christmas? 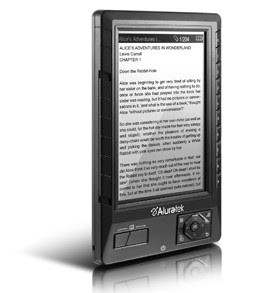 So what is different with this new ebook reader?

The Libre, from Alutrack, has not adopted eInk but has a monochrome 5-inch reflective light LCD screen. So it’s a 'lookie likie' that truly looks like the rest, but isn't. It just offers a cheap price of $179, but with neither LCD colour nor eInk quality. A Cheap man's eReader that doesn't compete with the eReaders and mobiles out there today or the tablet devices of tomorrow.

It may support all the formats and Adobe ACS4 DRM but somehow we think you would be somewhat disappointed if you found this in your stocking this Christams alongside those other tasteless gifts relatives often give you.
Posted by Martyn Daniels at Sunday, December 13, 2009