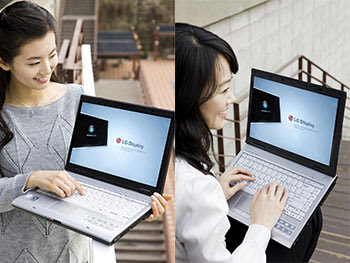 Digital Arts report that LG Display has developed LCD screen that it says looks as good outdoors in sunlight as indoors. It plans to unveil it CES in January in Las Vegas. The 14.1-inch display is aimed at the laptop market and has a switch to enable users to flip between the modes according to the light.

Panels in most televisions and laptops are illuminated from a backlight panel behind the screen. This is great indoors but isn’t bright enough outdoors but LG now use reflective panels, a mirror behind the screen, to reflect ambient light for a brighter outdoor image and increasing the contrast ratio from 3:1 to 9:1. The technology also provides extra battery life when in reflective and the backlight is switched off. There is are also transreflective panels that have both a mirror and backlight behind the panel and offer a compromise between the two displays but like must compromises, fall down the middle, neither good enough for one or the other extreme.

The display is still a prototype and there are no immediate plans to put it into production but unlike the eink world we hear so much about today it supports colour, video and everything we enjoy on a laptop /notebook.
Posted by Martyn Daniels at Monday, December 22, 2008