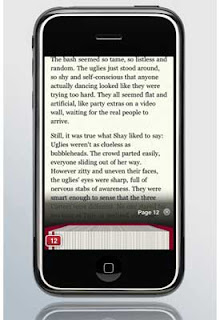 It amazing how in such a relatively small time the ebook market is flipping from the ‘traditional’ ereaders and moving towards the iPhome and mobile market. To us its both logically and enivitable and something we have been predicting for as long as we remember. Sure Kindle is sold out, Sony have sold 300,000 units but both these are a blip on the number of iPhones being sold and other 3G smartphones out there. Rwemeber that other great culture changer from what seems a long time ago – the Sony Walkman? Any device that has market resonance and arrives at the right time will change the market. Walkman, iPod, iPhone, Flip all have that magic to change and make the incombants lok tired, clunky and so what.

An article in Wired eludes to something else which is quite interesting. Chris Snyder wrote an interesting piece on ScrollMotion, a New York mobile application development for the iPhone which he believes will be the next ereader. ScrollMotion have reportedly concluded deals with a number of major publishing houses, Houghton Mifflin, Simon & Schuster, Random House, Hachette and Penguin Group USA and is in talks with several others.

The claim that they are dealing with front list titles such as Stephenie Meyer's "Twilight," Philip Pullman's "The Golden Compass" wrapped only in the FairPlay iTunes DRM and this differentiates it from the others such as Stanza. They don’t apply reflow keeping each title to the same pagination as the print book, while using the Iphone’s features to zoom in and scroll.

ScrollMotion also intend to roll out the applications on both the Android and Blackberry platforms.

So what caught our eye was not the article as much as the comments posted against it. Already folk are picking their favourites and backing the IPhone applications in a way we never really saw on the ereaders. The enthusiasm and language is different and it makes one think that one side has clearly connected with the street. This next year is going to be exciting as more and more iPhone and 3G users look to get more out of their devices and discover ebooks not as the primary reason they bought them but as added value in their devices.
Posted by Martyn Daniels at Tuesday, December 23, 2008