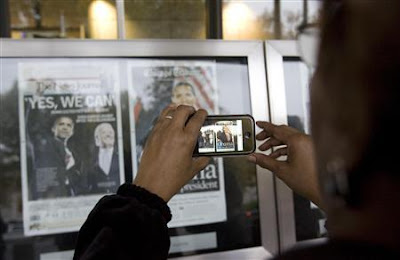 Reuters report that the November 5th newspaper editions on Obama's victory flew off the newsstands and some major newspapers struggled to keep up with the demand for copies. In response to demand, The New York Times and The Washington Post put out special commemorative editions. Newspapers in San Francisco, Denver and Chicago reported selling out and also printed special editions. Thousands of extra copies were printed in Baltimore, Hartford, Connecticut, and Orlando, Florida.

By the end of that day 800 sellers offered various copies for sale on eBay with a New York Times edition commanding bids up to $400.

Souvenirs are keepsakes and are often handed down. It is very interesting that in this digital age that people still valued and grabbed their memory of that historic day in the form that would remain with them forever – physical newsprint.
Posted by Martyn Daniels at Friday, November 07, 2008

Why is it that so many rushed to get a newspaper and didn't just take a screen capture of a website? I mean, everything is going digital and publishing is doomed, right?

In some cases, people want something real - something tangible and this is a great example. I wrote about this same issue this week at ckwebb.com