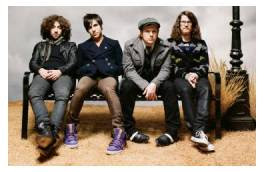 The digital music revolution is now entering its next phase. The first phase merely dumped the music onto your player, the content was the same, played the same but lacked that something that vinyl and CDs had – extra fun. Downloads didn’t have liner notes, photos, lyrics and all those extras that made the physical renditions more tactile, they were just digital content.

Now the mobile application boom has generated a potential answer – the total music experience. Before the December 16 release of Fall Out Boy's "Folie a Deux," the band will release an iPhone application. This is notthe first nor will it be the last and follows the lead taken by the likes of Pink, Snow Patrol and David Cook.

The iPhone application is basically an interactive website, accessing track listings, photos and lyrics from the band's entire discography as well as links to buy its songs from iTunes. As a mobile application it doesn’t need to be static and can be updated with more information and functionality and could include a mobile social network integrated with the community on falloutboyrock.com, Twitter tools, photo uploading and even the ability to find other nearby users with the iPhone's GPS location technology. The application can also contain games and streamed videos. The applications are only restricted by imagination, ability and effort.

By separating the music from the application they have avoided making the download complex, raising its price and best of all retained control. Importantly the applications could generate a new ‘must have’ around the iPhone and in order to compete the other mobile players would have to reproduce the application on their platform. However by tying the application to the device they have joined that current disconnect that occurs between the artist’s web site and the music whilst potentially replicating the web site content and experience on the iPhone. A very clever move and one that increases the overall marketing ‘stickyness’. Not an easy task as it evolves in many directions. Also with each band in effect creating their own application this makes the service even richer and compelling and also again harder to replicate.

Will the music labels follow and try to wrestle control? Some would say that this is inevitable, but again they have sat on their hands and the artists have taken the initiative and many will want to retain that element of brand and social group control. The music labels will also want it to be on every mobile device not just the iPhone. Can you imagine the likes of Sony rolling over and handing it to Apple? The other problem the labels have is that they are music producers and marketers and do not inherently have the skill base or set.
Posted by Martyn Daniels at Tuesday, November 11, 2008