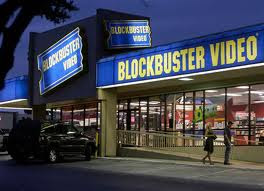 Blockbuster, the company that once owned the video rental business, has announced $900 million debt and that it has filed for Chapter 11 bankruptcy protection. In a last chance and throw of the dice Blockbuster are now fighting for their lives in a world that has now clearly moved to movies on demand and instant access to movies on PCs and other devices.If the courts approve Blockbuster’s Bankruptcy plan it will clear its debts and only have a $125 million loan to its new ownership group and importantly access to additional $50 million credit line to finance operations.

Currently, all 3,000 Blockbuster stores in the U.S. will remain open and the company hope that this move will reposition its brand and build on its library of over 125,000 titles, and our position as the only operator that provides access across multiple delivery channels stores, kiosks, by-mail and digital.

How do such a giant as Blockbuster get into this mess? The answer is that they missed the likes of Netflix, didn’t position themselves for digital and 3,000 stores don’t count in an online world or even in a world where video disks get serviced through the mail. By the end of the year it is claimed that you will be able to stream Netflix movies on more than 100 different devices, whereas Blockbuster is on less than six devices.

It is a salient lesson to all High Street players in the media world that being the biggest and best doesn’t guarantee tomorrow only that you have further to fall.
Posted by Martyn Daniels at Sunday, September 26, 2010