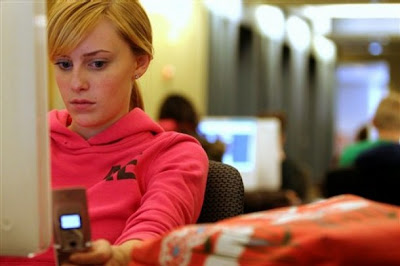 'Catch them young’ could be the cry from Apple as the iPhone goes into US education. Today’s New York Times reports on the iPhone moves into US universities.

Students already have cellphones and laptops and campuses are wireless, but imagine as a student that when you enrol on the first day you get given an state of the art, design icon iPhone! Abilene Christian University in Texas, has bought more than 600 iPhones and 300 iPods for this year’s new students and others such as the University of Maryland, Oklahoma Christian University and Freed Hardeman in Tennessee, appear to be following their lead. Others such as Stanford question whether they need to issue iPhones as 700 were registered by their students last year. However they are still pressing ahead with plans to develop mobile applications for their students. MIT question the suitability of the AT&T network but are reported to be watching developments closely.

The students who choose to get an iPhone, pay for their mobile phone service, but get unlimited data usage and both the iPhones and the iPod Touch can connect to the Internet through the campus wireless networks. So the student now doesn’t have to lug around their laptop and can pose clutching their new iPhone. Throug the phone students can be alerted about cancelled classes, area transport, campus issues, conduct student polls and much more.

So the focus moves away from the device and back to the content. An article in Ars Technica notes that the 2004 study by the California Public Interest Group estimated that students spend $900 a year on textbooks and it was coupled with the US Government Accountabilities Office statement that prices of academic textbooks rose by almost 300 percent from 1986 to 2004. Pick any year and a you will find similar statements on cost of books and increasing prices. The difference now is that alternatives are becoming available.

For example, the lecturer now has a greater choice between traditional textbooks or more open source content. The lecturer also now has the technology that can start to deliver the content to the student in chunks and tailored to the learning. Then there is the second-hand used text book complete with previous owners notes and bookmarks.

So the technology is slotting into place and the campus administrators realise that they can impact its adoption by endorsement or subsidy. We can assume that students will want content in a book, on their laptops, digestible chunks and reference on the mobiles, access to print on the nearest printer maybe a customised print on demand copy from their campus store. The question we would ask is whether we are all joining these dots together into a framework of interoperable solution options or viewing some options as replacement technology?
Posted by Martyn Daniels at Friday, August 22, 2008