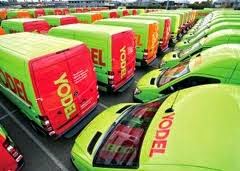 In the UK we have just seen the impact of an air traffic technology blimp of less than 60 minutes on the control of international traffic airspace, flight schedules and travel over a great area. Distribution logistics is no different and can often appear very simple and straightforward when it flows correctly, but can become complex and spiral out of control when things go wrong. This week’s news that Yodel, one of the UK’s largest package carriers, had suspended supplier collections due to an unforeseen spike in traffic, is somewhat alarming and also begs the question on how the smooth this out before Christmas.

Yodel’s official statement to clients, claims that Black Friday and Cyber Monday had exceeded all analysts' expectations and in many cases orders for UK retailers were double the previous record level set last year and that parcel volumes then had continued to be high.

However, Amazon, which uses Yodel and is a shareholder in the business, said orders would continue to be processed and delivered in "the normal time frame".

Catalogue retailer Argos said their deliveries to customers were unaffected, whilst Marks and Spencer was forced to extend delivery dates for online orders as a new distribution centre struggled to cope with heavy Christmas demand.

Others would question why some carriers aren’t in the same position and whether the true facts are being presented?

What is clear is that Yodel gave suppliers less than 24 hours’ notice that they were effectively suspending collections for the Thursday and Friday of last week and with Saturday and Sunday being collection free they were hoping to be back on an even keel at the start of this week. It is obvious from some statements by their larger customers that some retailers may be getting a fast track service and are being impact less by the spike.

The challenge to any logistics spike is that it has to filter through the whole supply chain and the resulting ripples that queue up behind it, also have to run their own course. We can guarantee that the majority of suppliers put in an extra effort into maximising the Wednesday pick up quantity and so ensure that these were in the pipeline. We know of one supplier who doubled their outbound quantity that day and if this were repeated across just a fraction of Yodel base the next spike is not only predictable but inevitable.

Do they expect that Monday will be a normal day or do they expect to be collecting three days’ worth of dispatch plus all weekend traffic? Will this then force another ripple in the chain? They will obviously will have an excess volume of stuff to deliver. They may engage extra third party delivery services to help with this spike, but will these maintain the required service quality, or be more concerned in getting stuff delivered at any price and condition?

We then come to some other factors which some suggest actually caused the spike to be a problem. During November Yodel took major contract action to streamline their contracts, not only standardising rates, but forcing some to change their distribution profiles. This could not have helped the situation and maybe introduced a change timed at maximising their earnings. This standardisation of contracts may have also actually backfired, as some had to make system changes to realign their work and others parcel package profiles changed which in turn changed Yodel’s profile. Some also suggest that Yodel has maybe been too eager to pick up new business from others and not fully factored these into their forecasts.

Finally we have a market space that is going under major change. We don’t mean the retail and online market but the carriage market that services it. Amazon’s impact in this market can’t be underestimated as they have used not one but many services, have learnt the business and now are designing many out as they start to take greater control of their own chain. The impact of next day, or same day delivery has had a major impact on everyone’s expectations and service infrastructure and the reason Amazon forced this issue, was not just to higher the customer expectations, but also to increase the pain and costs of its competitors, who have to respond to something outside of their control. We may laugh at the prospect of drone delivery but it will happen, but perhaps not quite as we expect it.

Supply Chain Management is not just about the consumer but about streamlining the whole chain from start to finish and when we look at the booktrade we only see one player doing this.

As for Yodel, it is reasonable to predict that there will be a further moratorium on collections before the end of the year and that some deliveries will not be on Santa’s sleigh in time.
Posted by Martyn Daniels at Sunday, December 14, 2014