Walking around the Frankfurt Fair and especially in Hall 4 one was impressed with the number of ereader devices on show. The booths weren’t heaving but the devices were there and no matter if they all resembled each other what was impressive was the number of players who are banking on a return in this developing market.

We have the entry of the cheap reader that achieves today’s critical price point of $149, which almost qualifies it as a cheap present for Christmas. The Ectaco JetBook dispenses with eInk and gives us a 5” reflective TFT and instead of the usual batteries we find a slot for four AA batteries and don’t bank on huge memory as it just squeezes in 100MB. Thanks to Lesenpunknet we even have a video below. 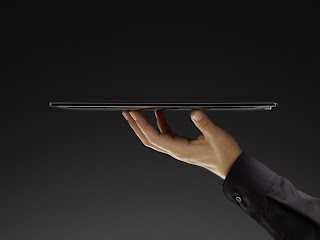 Only an elephant has a longer gestation period than the Plastic Logic reader. We can only hope that when it finally lands that it lives up to its promise and doesn’t fail due to the time it has taken to bring it to market. Extra thin, lightweight and wireless-enabled, QUE is the size of an 8.5 x 11 inch pad of paper, less than a 1/3 inch thick, weighs less than many periodicals and has a touch screen interface.

Egadget brings us news of Pixel Qi’s 3Qi display, which first wrote about in May this year 3-screens-in-one-could-kill-single' and is a transflective display contains both e-ink and LCD properties. At a flick of a switch one can toggling between the two displays which is good for battery life and good for the eyes. Its like having a black and white TV that plays colour, or a colour TV that is HD. Its still to arrive but is coming to a netbook or tablet near you.

More of the Same

The array of eInk ‘lookie likies’ grows by the day. Are they different, or due they create a must have proposition? We think we will look back in a couple of years and wonder why we got so fixated on these devices as they are today. A bit like looking at those early mobile phones that resembled carrying a brick around or the first IBM PC that was so portable it needed a trolley.
Posted by Martyn Daniels at Monday, October 19, 2009