We returned from two weeks vacation but while we were away the world of ebooks didn’t take time off and two new devices were spawned in our absence. 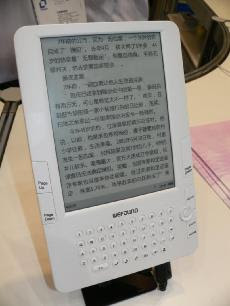 The market for ebook readers is growing all the time and we have often referred to the many eInk ebook devices as, ‘lookie likies’, but now they really are! Whose has copied who, the Chinese appear to have copied Amazon, who else? The Chinese Founder Group has announced its $200 Kindle ‘lookie likie’ aimed at the Japanese and Chinese market at this month’s Tokyo’s Digital Publishing Fair.

Founder’s e-reader is called the ‘weFound’ and looks like the Kindle 2 with a 6-inch e-ink display. It doesn’t have a Whispernet wireless connection and uses a SIM card to directly downloaded books onto the device. This means that unlike its original brother, the new pretender’s internal modem doesn’t restrict downloads to a single network. The other obvious difference is that it displays double-byte characters which are essential for supporting Japanese, Chinese and Korean characters.

Founder has stated that the ‘lookie likie’ will be commercially available at the end of the year in China. 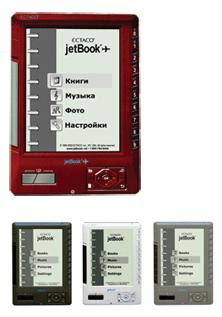 However they are not the only new boys in town and the Ectaco JetBook has also arrived to the party. However, there is a real difference here in that the Jet Book does not the use eink or a back lit screen but a LCD screen. The Jetbook also doesn’t have a touch screen function and uses numerical buttons along the right side of the reader and directional and page turn buttons located under the screen to navigate.

The JetBook comes with the usual bundle of free books pre installed but has one huge disadvantage in that it doesn’t support DRM files. So you may get the King James Bible and the Fodors Travel Guides and loads of classics but will miss out on many best-sellers. Not a wise move today. It can play MP3 files but only supports a 2MB SD card so again not a wise move.
Posted by Martyn Daniels at Sunday, July 19, 2009