An eReader With a Difference 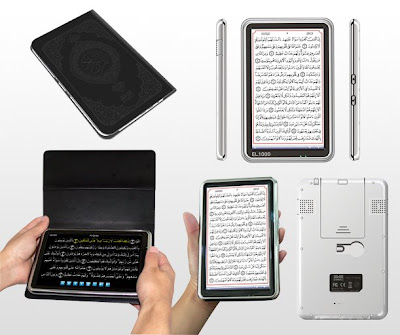 The "E-Alim EL1000" is certainly one ebook reader with a difference. Forget the 7” LCD touchscreen, stereo speakers and microSD expansion slot, the ability to store and display pictures and video. The reader, whose name translates as "the electronic scholar," is claimed to be the first Arabic ereader.

It can displaying the Qur'an in six different Arabic fonts and translates the Qur'an into 24 different languages: Albanian, Azerbaijani, Bosnian, Dutch, English, Finnish, French, German, Hausa, Indonesian, Italian, Latin, Malaysian, Persian, Polish, Portuguese, Russian, Spanish, Swahili, Tamil, Thai, Transliteration, Turkish, and Urdu. The device also contains Tafseer (Qur'anic commentaries) in voices of 6 famous Reciters, Hadith (information about Muhammad's way of life), prayer times and Qibla Direction for major cities of the world and other religious materials. It is even supplied with an external analog compass so that users can oriented themselves properly for purposes of prayer.

The E-Alim EL1000 has been launched in the United Arab Emirates where it is available for 917.5 Dirham (approximately $250) and is expected to sell around 10,000 units this year.

It is interesting move in that it has an appeal to a huge audience and has taken a narrow, but multi media approach to its market.