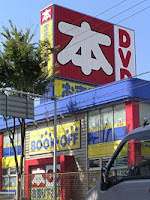 News today via Asahi Shimbun reported that Bookoff Corp. (ブックオフコーポレーション Bukku Ofu Kōporēshon), Japan’s largest chain of second-hand bookshops with some 890 stores throughout Japan and ton overseas, has offered to pay the Japan Writer's Association, the Copyright Network for Comic Authors in the 21st Century and other groups 100 million yen.

Bookoff resells second-hand books in like-new condition, manga, CDs, DVDs and video games. Wikipedia cites as one of its success innovations is its practice of ‘shaving the edges off the pages of books using a special machine in order to make them appear newer’. This has enabled it to offer a wide range of books that appear new but at aggressive prices. This competes well with japanese conventional bookstore chains, who are regulated against selling new books at a discount.

The offered payment is in response to authors who have complained the sales cut into their new book sales and undercut their royalty income. Japan copyright follows that adopted by many where the copyright fee only applies to first sales.
Posted by Martyn Daniels at Thursday, April 03, 2008