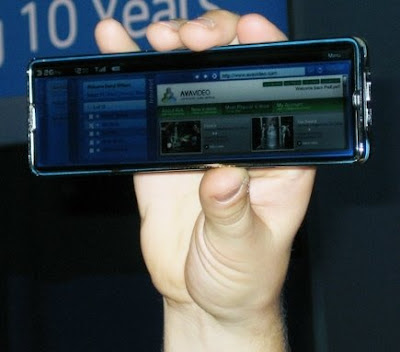 Just when we thought that there were two clear platforms; the laptop and the mobile, the chip giant Intel starts to redefine the world. We read an article in the New York Times that they are hoping to build on the success of the iPhone and other smartphones with new computers they are calling Mobile Internet Devices, or MIDs.

The previous PDA (personal digital assistant) market of Palms has nose dived with the introduction of smartphones and continual shrinking of the laptop. However it is claimed that new MIDs are scheduled to begin showing up in consumer electronics outlets in June driven by an offer to provide low cost, highly portable laptop.
Intel believes that their MID chips will be fully compatible with the laptop and desktop processors and its data, making them compatible with the vast majority of today’s Web software. What we can envisage as a result is a revolutionary step change to new devices such as ultra compact laptops and tablet-size web browsing and social networking devices.

The question is which technology will be the driver voice or web / data? Voice remains dominant today but will that continue or is its strength today merely down to its mobility and size and therefore under threat as others achieve the same breakthrough?

The key in this interesting battle is over the ultra low energy chip market and whether the winner will come from the smartphone market and players such as ARM, who have sold over 10 billion ARM chips through more than 200 licensees and who claim that more than eight million chips a day are being used in cellphones, smartphones and hand-held devices, or from Intel. Intel is currently working on consolidation of this under a new generation processor, code-named Moorestown.

We can also see the death of the ebook reader as we know them today. Although storage prices are dropping who wants to carry around 200 books when you are always connected through a single device?