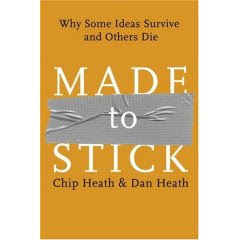 We read today of a move we long expected to make a return – digital chapters.
Remember ‘Riding the bullet’ by Stephen King which he released in chapters digitally in mode of the most famous chapters man Charles Dickens. Today few realise that that Dickens wrote and released his works this way and many have forgotten the famous Stephen King ‘experiment’. So today its good to see Random House taking on a chapterised experiment. They have long been at the forefront of the digital experiment and this certainly is one to watch.

Random will sell the six chapters and epilogue of "Made to Stick: Why Some Ideas Survive and Others Die" for $2.99 each. That makes the total price around $21 for a hardback listed at $24.95. However we can buy the ebook today for $16.47 , the audio CD for $19.77 and the downloadable audio Mp3 file for $15.73. The question this begs is why its is priced so for what is clearly a promotion to sell the book and also the concept. It is in danger of starting life with its hands tied behind its back!

We can only wait until someone is brave enough to write and publish a blockbuster in chapters. If the last Harry Potter had been published in chapters not only would the premium be paid on the digital copy but the publisher would not have given away the margin and the physical copy would have probably sold as many copies. The channel would have responded in a heartbeat and everyone would have experienced the ebook. Importantly we would not be sitting hear debating if and when the tipping point on digital will happen.

Come on someone ride the bullet.
Posted by Martyn Daniels at Monday, February 11, 2008