My Space, My Music, My Book?

Could MySpace with its captive audience extend to capture the music download market?

The online social networking site owned by News Corp, is reported in sources including Wall Street Journal, Financial Times and CNET.com as being in talks with the major music companies to launch an ad – paid free music service.

This could effectively open up the free music to a huge market, obviously generate significant ad revenues and blur still further social sites and media. It would certainly capture the attention of the widest audience and turn MySpace into an even greater phenomenon. It would also act as a launch pad to catapult News Corp potentially into many new acquisitions. 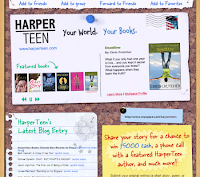 We read last month that HarperCollins plans to team up with its sister company MySpace, to build and launch a new "create and share" space, http://www.myspace.com/harperteen where kids on the site can write prose and share it with friends on MySpace. Given the ownership of HarperCollins and their digital drive, will we next hear about My Space giving ebooks away on an advertising paid model?
Posted by Martyn Daniels at Wednesday, February 20, 2008