The Circulation Library: Learning From The Past 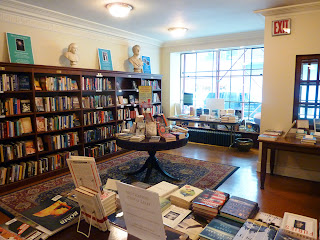 We love to find those hidden gems which those in the know often take for granted but which genuinely surprise and inspire us. Today we learn about one whose history and proposition has much to offer in our thinking out the bookstore and library of tomorrow.

When the Mercantile Library of New York opened in February 1821, the city of New York had fewer than 200,000 inhabitants and the entire population of the United States was only 9.6 million. It was the era of massive expansion, opportunity and mass immigration. The dawn of the American dream.  William Wood  was a successful merchant who was devoted to reading and to the education of mercantile tradesmen and genuinely interested in creating future business leaders out of young men just beginning their careers and doing so on the back of Benjamin Franklin’s recommendations for the creation of lending libraries. Wood convinced a number of wealthy  merchants, that an investment of a few hundred dollars could establish an institution that would keep their employees “away from the rum-shop and the billiard-room.”  In time the merchants became shareholders and this Mercantile Library model was adopted by others in cities such as Philadelphia, Albany and New Orleans.

When it opened dues were two dollars a year and there was a one-time initiation fee of one dollar.

By 1830, the library had 1,200 members and over 6,000 volumes and included not only a Reading Room, offices, stack space, and the rental rooms, but also ample space for writers to work.  Edgar Allen Poe was one of the first writers to occupy one of these spaces. Such was the interest in fiction that in 1836 the Board of Directors stated:  “The addition of works of fiction offers an inducement to seek for the acquirement of knowledge in the alluring fields of romance and the imagination.”

By the early 1870s, the Mercantile Library was the fourth largest library in the country and the largest lending library in the United States. Only the Library of Congress, The Boston Public Library, and the Harvard University Library had larger collections.

Today it has become The Center for Fiction and the collection grown to over 85,000 titles of classic and contemporary fiction, as well as literary journals and magazines. It is the only organization in the United States devoted solely to the vital art of fiction and its mission is to:

Encourage people to read and value fiction and to support and celebrate its creation and enjoyment. With all our resources, including our exceptional book collection, our beautiful reading room, our expanding website, and our ever-growing array of creative programs, we seek to serve the reading public, to build a larger audience for fiction, and to create a place where readers and writers can share their passion for literature.

By 1893 circulation of fiction far outstripped circulation in all other categories: of the 169,627 books circulated, 92,374 were fiction.

The appeal of the library was impacted by the creation of the New York Public Library at the beginning of the 20th century but it continued and weathered the great depression, two wars and the recession in the 1980s.

In 2001, it began to focus on its fiction collection adding its mystery and suspense, which contained many first editions and rare early mysteries.  The Center now has a collection of over 85,000 titles. It is now a literary arts center for the 21st century, a meeting place for readers and writers with a annual program of over 60 literary events which are free or low-cost featuring over 100 authors, translators and critics each year. They offer reading groups and writing workshops led by acclaimed teachers and writers, partner with literary magazines and independent publishers to present the best emerging authors, provide low-cost workspace and grants for writers, have an independent fiction bookshop, and feature programs to get kids reading.

The history of the library and how it has embraced culture, community, commerce and forged a position between authors and readers has much to offer. Today it is encouraging new members to its great proposition by a greatly discounted membership via Groupon. It clearly is not and never has been afraid to lead the way.