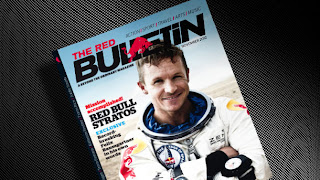 Yesterday we listened to Christian Graf-Simpson from Red Bull talk about the Red Bull brand and its digital publishing programme under the Red Bulletin label. They certainly have taken the publication and created a dynamic app and an impressive digital rendition using Adobe technology. However when we spoke with Christian the presentation some of the gloss faded.

They still design for print first and then create the digital renditions off that. They obviously add more content and media but inherently it’s print first, digital second. Does this make sense in today’s world? Is it easier to see the digital picture first and cut back to print, or expand print out with digital fillers? Is the strategy one driven by the way they have always done it, or the tools they use and is it the best way forward? It would appear that it is more about the physical being the money generator and the digital the give away than anything else. Yes Adobe have gone a long way with their creative suite but inherently they don’t appear top have changed the process but merely added more tools sophistication.

The other challenge was the creation of many digital renditions to satisfy the various digital forms to be serviced. Red bull create separate renditions to maximise the fit to the platform and then serve these up as subscribed. They however don’t use templates to automatically repurpose the content and also create the files and store them as opposed to creating them on the demand against the template. This may be operationally perfect but we would question if it is right given the variation of forms available today and moving forward and also the fact that their customers will change devices and may which to view the content on different devices according to where they are.

If Red Bull were to flip its business model to a digital subscription and away from physical print what would be the implications? They have clearly pinned their flag against Apple and their store and would obviously in a digital subscription model would have to give away 30% before they passed go. How do magazine subscription models work when 30% is taken by Apple and if they build the app to the degree where it becomes the service, are they effectively building Apple’s future income at their expense?

Finally, we were intrigued by the size and reach of an organisation which we still viewed somewhat naively as a drink’s company and racing sponsor. Today they have clearly gone past that and Red Bull Media is a multi media organisation. However, they still operate in separate verticals even within the publishing division and it begs the question on how organisations as diverse but with such a central media core should be structured.
Posted by Martyn Daniels at Friday, November 16, 2012