So you have an iPod Touch and wish it was an iPhone? Now you can with a new device called the Apple Peel 520.

The Peel is a shell that fits around the iPod Touch and contains a battery, dock connector and SIM card that allows voice calls. Users will have to ‘break’ the iPod software to install special software to enable a text messaging function, and to allow the device to properly work with the iPod Touch.

The device doesn’t come from Apple but from Yosion Technology in China and was invented by a student who says he did it, "because I love the iPhone, but it's too expensive in China." The iPhone in China costs between $588 - $740, the iPod Touch some $,235 and the Apple Peel sells for $57. 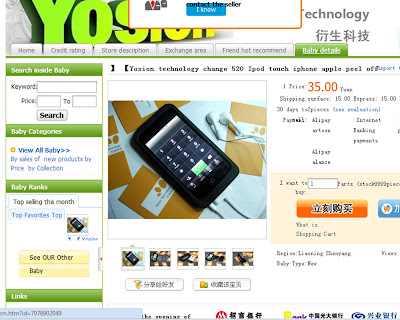 The Chinese market has problems already with cheaper and greater functional iPhones being smuggled in from Hong Kong and the West. Now these are being sold Taobao.com, a popular Chinese e-commerce site.

So we now can peel an Apple
Posted by Martyn Daniels at Monday, August 16, 2010