Bookselling, Breakers and Runners in Cyprus

2010 appears to be the year for visiting North / South border disputed areas. First, we visited Korea and now Cyprus. Many, especially the displaced, see the North as an illegal state, a province of Turkey. Only some 36 years ago the Turkish army invaded and there followed the truce and the resettlement into Northern Cyprus of some 40,000 Turks. The international community views the North as an illegal state and it is still only recognised by Turkey and Bangladesh. The no man’s land strip divides this beautiful country from East to West and today is still as heavily controlled as ever.


On one day we arranged a trip to cross the military checkpoint border in Nicosia/ Lefkosa to meet friends of Bibliophile, visit the Moufflon Book store and have lunch with the proprietor Ruth Keshishian. 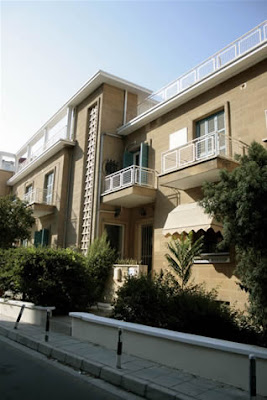 The Moufflon bookstore is a true destination store and reminded us of a small version of New York’s infamous Strand Bookstore. Ruth inherited the business from her father and has continued to maintain a perfect balance of stock and she is a true bookseller. She stocks new, used, rare, bargain books and a wide mix of genre including trade, academic, art etc. There is always something about a real bookstore that you can feel and smell as soon as you enter. The shelves are not merely wallpapered by publishers on the no risk sale of return terms, but individually bought and sold. Ruth also has a book binding and restoration service. In fact, on spotting some Freya Stark works Ruth knew instantly what she paid for them, where she bought them and went on to talk about Freya Stark’s connections with Cyprus. This knowledge wasn’t just restricted to these titles, as she proved many times during the day. She also had a positive thirst for knowledge on digital issues. 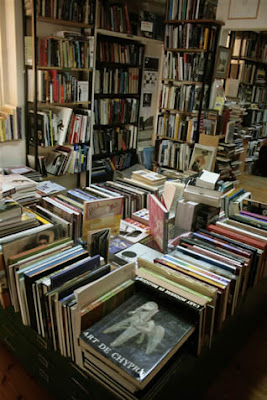 Just as Cyprus is divided, everything has two, (or maybe three) names. Maps from the North only show everything with its Turkish name and the south with its Greek or Cypriot name. As a result there is a high demand for maps as anyone travelling between over the divide often needs two to make sense of where they are! Hence they are Ruth’s biggest seller.

While we were there Ruth was collating a significant library of old military, theatrical and other book plates to send to the UK for auction. The Moufflon doesn’t sell plates but Ruth had found herself with some four stacks from rare books which were each piled some 2 foot deep! Apparently ‘breaking’ and selling loose leaf images is, as in many places, is a business in its own right in Cyprus.

The other interesting business in Cyprus is that of ‘runners’ who acquire very old manuscripts and then auctioned them off on EBay over the internet. With very high demand from affluent collectors and the new rich, there apparently is much money to be made in running or selling to order or demand.

The other aspect of Cyprus we discovered was how easy it was to buy counterfeit videos. Often they came in a slither of a wallet and when played slipped in and out of focus, had distorted sound quality and some even flipped occasionally into Turkish, German or even Russian. Occasionally there was a near perfect one! However walk around Kyrenia, (or should that be Girne), and you would see them openly on sale. They say that the North is to become the Las Vegas of the Mediterranean and has huge investment pouring in, but clearly copyright isn’t going to win on these tables.
Finally, Ruth told us about a friend who had brought ten Kindles into Nicosia. They were sold in no time, but the people who bought them merely wanted to be seen with them and not use them to read books!
Posted by Martyn Daniels at Monday, August 02, 2010