India Has its Own eBook Reader

EC Media has launched "Wink", which they claim as "India's first e-book reader".

We have to recognise Indian is not only the powerhouse of digital publishing today and itself is starting to embrace its output. We may think of India as third world but in many ways it is now casting that aside and generating wealth which EC Media is trying to capture through the Wink which can be picked up from a local Croma, a major Indian electronics retail chain. They claim over 200,000 titles as well as newspapers, magazines and journals. The Wink is specially designed for the Indians as it can support content in more than 15 Indian languages and They claim that they will soon support all Indian languages on the Wink. Books will generally sell for 50 to 75% of the cost of a paperback. 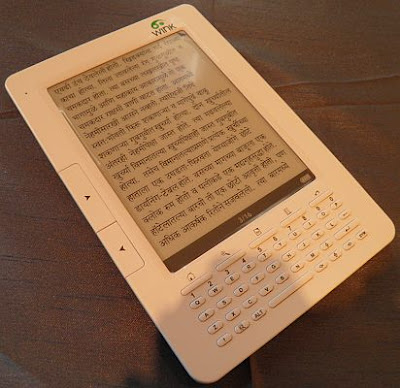 The point is that both China, where most ebooks are made and India where the west does its digitisation, have the ability to do it themselves. Maybe we should look at the history other electronics and manufacturing industries, such as cars and where the power now lies. Books may not be different.
Posted by Martyn Daniels at Sunday, August 22, 2010

Sorry to disappoint you. But India's first ebook reader is Infibeam's Pi which was launched months ago.

This is one of the worst Value for Money eBook reader in India. Even getting the Amazon Kindle 3 (which is obviously much much better in every respect) is cheaper, around 8000 rupees inclusive of taxes and shipment versus the 11500 rupees for the wink. To add insult to the injury, the cost of eBooks at the wink store is higher than the paper back books.

This is the first e book reader which supports Indian languages...